Christian, It's Time to Clean Up 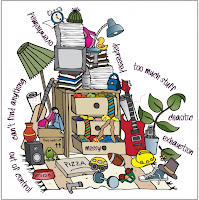 Many of us have heard the biblical adage:  "Physician heal thyself."  Luke 4:23

The cartoon graphic here is mild compared to the clean up work needed in the hearts and lives of the majority of professing Christians.


Think about it....
How many professing Christians do you know who smoke, drink, brawl, fornicate, hate, judge, and condemn others?  How many times recently have you done so?  How many Christians do you know who are unloving, unforgiving, violent, fearful, cowardly, proud, arrogant, excessively materialistic, adulterers, gossipers, slanderers, debtors (promissory, financial, material, labor), liars and thieves?
Christian, It's Time to Clean Up.

Many Christians have entangled themselves in debt through financial undiscipline and excessive appetite. The resultant debt proves “broken vows” (to repay on time). So though many are unmitigated "truth tellers", past-due debt proves "good Christian people" who don't "smoke, drink, or fornicate", can be ensnared by debt (past due bills, defaulted loans, poor credit, etc.) so rendering them unintentional liars and thieves.


That's right, no one wants to hear they are "liars or thieves" for having past due debts and broken promises. Many would deny it vociferously, but that's exactly what broken promises are: lying and thieving -- breaking trust. Realizing this in light of God's Word: "Thou shalt not lie." (I'll pay this back on such and such date -- trust me) and "Thou shalt not steal." (Creditors having to charge off delinquent debts) should cause Christians to fast track and pray for God to provide the godly character and money to pay off all my financial debts which can be paid. Fortunately, faithful tithe paying equals faithful bill paying, budgeting, and money management. So start by paying your tithes.


In terms of non-financial debt, how about the friend you promised to accompany to the theater and never did? Or an associate you promised to meet for lunch but had to reschedule at the last minute and never ended up having lunch as originally promised? I think you get the point.


Thus, pray you not only have the "will" to repent and clean up in every area of character short-comings, but will have the consistent woks to prove it. As the Bible shows we will be judged not only by our faith, but by our works.


"And I saw the dead, small and great, stand before God; and the books were opened:
and another book was opened, which is the book of life:
and the dead were judged out of those things which were written in the books,
according to their works."
Revelation 20:12
Listen, wherever we're unable, by our own strength, to cease doing what offends Christ and His Word, we can assuredly pray: "Lord Jesus, save me from sinning against you and forgive me wherever I have -- change me to be like You."

8book.org
8book.org exists to strengthen and support Christians by practicing and advancing the Gospel of Jesus Christ through media featuring Christian artists. All 66 books of the Bible are the inerrant Word of God, therefore, the Bible is the exclusive determiner of 8book.org policy.